For this shoot I decided to use a blue background because I thought I would experiment with different coloured background instead of just using the yellow background and experimenting with different clothing. I decided to use the same model I used in the cove studio because she was an amazing model and was very comfortable in front of the camera which meant she moved around and was not just waited for instruction to the different poses to do. I also decided that for this project I would buy all the clothing as that I did not just rely on the model to bring the clothes. So for the shoot I got a yellow pinafore, red jumper, blue top, orange tights, stripped yellow top, Red top and two pairs of statement colours in different colours. As I did for the yellow background I was worried about how I was going to light the blue background and again researched the best way to light the background with out getting a line across the colour roll.

Sadly this shoot did not go completely to plan because the people who was in the studio before me  broke the blue colour roll which meant as I was shooting the blue colour roll was falling down. I told the ERC and they said there was nothing they could do to help sort out the background and told e to use it anyway. So throughout my whole shoot the blue background was falling down leaving a big crease in the colour roll. This meant I had to change my plan for the shoot and mostly do portraits and every once in a while pull the blue background out to get rid of the crease to take some full length image. This mean that the whole shoot was delayed and I only had about an hour and twenty minutes to shoot. However my whole teamed worked really well together the makeup artist putting the makeup on the model, my assistant and I started setting and then me and the model worked well together to get some great images. Looking back at all the contact sheets and seeing the images I managed to create on the day I am very pleased and I think this series of images are one of my set of images I have ever taken.

The main problem with the shoot was that the background was broken which meant it was harder to take images as I was mostly restricted to to portraits, which though restricting I got some great images with different camera positions, angles and poses. So I think that If the background did not break I would have gotten some amazing full length images as I think I lit the model and the background very well throughout the whole shoot. Here are some images that did not go right in the shoot either because you can see the creased background or the posing of the model was just not right. 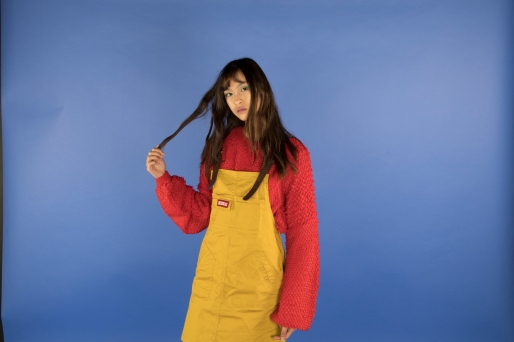 Overall I think the shoot went really well we worked really well as a team and as I said before I think this is one of my favourite set of images I have done and defiantly the favourite shoot of following this trend of colour surge so far. Here are some of my favourite images from the shoot as I love the positioning of the model and the way in which I have experimented with different angles and not just stayed straight, and how I have lit the background and model works really well together

If I was to do this shoot again I would maybe try and be even more persistent on getting the ERC to help with the broken background, but I worry if I did ask them more times than I did I would of run out of time to do the shoot and would not got the images I did. I also wish I had the studio booked out for even longer and maybe had a couple more sets of different clothing just so I could really experiment with the trend Colour Surge and using a blue background.

After finding it very hard to pick what one of these images I wanted to use as my finally, I decided that I would talk to Gem and get her opinion on the images I should use. After awhile of looking through all the images and thinking which set of clothing showed colour surge the best I decided on two images with the model wearing different clothing. For the first image I did not have much editing to. However for the image with the blue top and the orange tights I had to do a little bit of editing to get rid of the top of the orange tights so you could not see the ending of them. Now looking at the images you would not of known that it was there as it looks like her legs are longer and not that the tights initially ended there. I think that both my final images for this shoot look very different and even look like they where taken on different days, which is why I am defiantly using these to as a final

At the end of this shoot I am very pleased with how it went and love the images I have produced from this day. Not only did we work well as a team to get over the problems we faced, but I had a great time on the shoot. I could not be happier with the images that have come out of this shoot. I hope that the next shoot I do will be just as great whilst experimenting with different ideas. I am thinking for the next shoot to do a location shoot to move forward from my last shoot on location that did not really go to plan

This is a text widget, which allows you to add text or HTML to your sidebar. You can use them to display text, links, images, HTML, or a combination of these. Edit them in the Widget section of the Customizer.